Zen and the Art of Science Popularization

I remember reading a stack of popular physics books back in the 1980s and 1990s that proposed a connection between quantum physics and Eastern philosophy. For example, The Tao of Physics by Fritjof Capra and The Dancing Wu-Li Masters by Gary Zukav. What happened to all of those ideas?

I recalled this experience while I was reading parts of Ecology, Ethics and the Future of Humanity by Adam Riggio. I’m in the middle of writing a review of the book and one of the early chapters mentions the connection between ecological thinking and Eastern philosophy and religion. This got me thinking about the different ways that the natural sciences are interpreted in order to explain both the ontologies and ethics of the world around us.

Physics, especially quantum physics, with its esoteric descriptions of wave-particle dualities and the uncertainty principle were, at least in my reading experience, fertile ground for building connections between the natural sciences and the new age nostrums which were introduced in the 1960s and grew increasingly popular throughout the rest of the 20th century. Schrodinger’s cat, that was both dead and alive until the wave-function collapsed when the observer opened the box, was one of the favorite mind-bending paradoxes from particle physics to be imported into the popular consciousness.

But by the end of the 1990s I feel like that metaphorical touchstone was starting to wane. The random pop culture evidence that rises to the surface of my consciousness when I think about this topic is The Matrix, the Wachowski brothers movie from 1999. One of the key intellectual references in the movie, called out by name, is the postmodernism of Jean Baudrillard from his book Simulacra and Simulation. The other great underlying pop culture ground from which the movie drew so heavily were the science fiction cyberpunks who had envisioned the rise of the network society, as it was then being instantiated in the form of the Internet. The Zen attitude of accepting duality at the base of physical reality had transformed into the belief that we were being trapped within a system of our own building, which was designed to control us for the benefit of the machines.

Another 1990s pop culture touchstone is The X-Files. Again the idea of a conspiracy or hidden reality was at the forefront, but for a more sinister purpose. Forces larger than ourselves, especially aliens, were somewhere out there, along with the truth. The new age interpretation of physics was way too mild for the new, more cynical, times.

Further confusions were came soon from the worlds of particle physics and cosmology. The importance of the Uncertainty Principle and Schrodinger’s cat paled in comparison to the confirmation of dark matter and dark energy in 1990s. At the same time I feel like superstring theory became the darling for many pop physics books. I’m thinking in particular of books by Brian Greene and Brian Cox.

At the same time the very real connectedness of the network society and, perhaps, a growing awareness of ecological connections and interdependencies made quantum physics and Eastern religion less appealing as a way of explaining the world, at least for consumers of popular books. I don’t believe that physicists ever seriously accepted the connections people like Capra and Zukov saw between quantum physics and Eastern religion.

Perhaps the actual connections between human minds through the Internet made the interconnection of consciousness, in the form of observers like us watching the universe create itself, less important. Likewise, ecology embedded human beings even more directly into the physical world and the reality of global warming showed how disastrous human activity could be for the environment. By contrast the interconnection between consciousness and reality postulated by the new age physics popularizers feels like a belief for another, more hopeful, time. 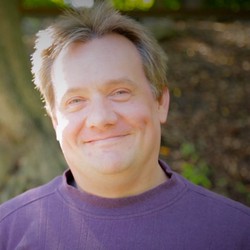 My interests include digital scholarship, citizen science, leadership, and communications.